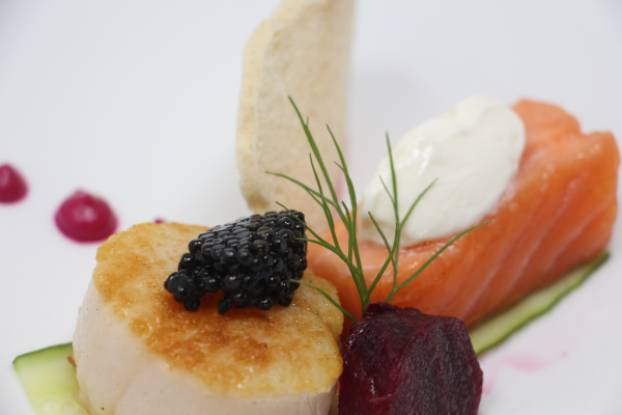 Caviar, one of the world’s oldest delicacies, is often described as the ultimate symbol of opulence.

“The first known record of caviar dates back to the Greek scholar Aristotle. In the 4th century BC, he described this delicacy as the eggs of the sturgeon, heralded into banquets amongst trumpets and flowers,” according to an article by Miruna Mirica-Damian in “The Art of Living” online magazine.

“The British kings of the Middle Ages used to reserve all the sturgeon for their own consumption, set-aside solely for royalty. However, it was the Persians who first prepared and savoured sturgeon roe, as they attributed many medicinal powers to it.”

Caviar became world-renowned in the late 18th century thanks to a Greek sailor and trader who introduced it to Europe from Russia, according to sturgeon farming company Sterling Caviar.

Prized by Russian elites, caviar is the processed salted roe of certain fish, most notably sturgeon, states the New World Encyclopedia. “It is commercially marketed worldwide as a delicacy and is eaten as a garnish or a spread, often as an hors d'œuvre.”

Now this fabulous delicacy can be found at The Wharf, one of the best restaurants in Seven Mile Beach in the Cayman Islands. The cuisine that features caviar includes blinis and poached or hard boiled eggs, as well as salmon. Often, caviar is served on toast or on scallops, and in general, any type of fatty food can be added. Toppings may include chives, scallions, capers and crème fraiche. The trick is to keep the flavors very clean, according to the chefs at The Wharf, who are recognized for creating fine dining in the Cayman Islands.

Also, the chefs note, caviar is best paired with Champagne or Russian vodka. The Beluga Siberian caviar served at The Wharf in Grand Cayman can easily be paired with these spirits from the restaurant’s extensive list.

In addition to its exquisite taste, caviar has health benefits that perhaps many people are not aware of.

It is high in vitamins A, B2, B12 and D, among others, as well as amino acids, omega-3 fatty acids, iron, calcium, zinc and magnesium.

Some sources state that caviar may help reduce headaches, including migraine headaches, and that roe has been shown to contribute to good bone health due to its high calcium content.

One skin-care line, Caviar of Switzerland, goes so far as to say that the large amount of water in caviar improves the skin’s “elasticity, hydration and overall attractiveness.” Whatever the cosmetic benefits, it’s likely that most people order caviar for its unique and delicious taste.

Above all, caviar is among the best food in the Cayman Islands. At The Wharf, caviar is served as noted above, and it can also be included at special events with our catering in Grand Cayman.

While you enjoy relaxed, elegant fine dining along the stunning waterfront in the Cayman Islands, be sure to include caviar and Champagne or Russian vodka, and make any occasion special at The Wharf.