Indulge in the Exotic Fusion of Spanish Cuisine and Caribbean Flavors

Celebrate a grand Spanish tradition with Caribbean flair and local ingredients at The Wharf. 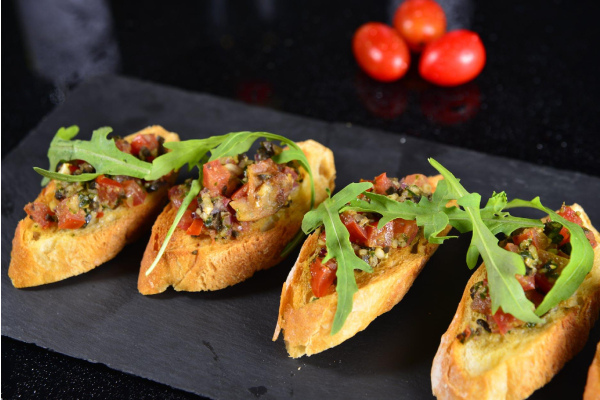 Tapas are served all day, every day, in bars and cafés throughout Spain. While everyone agrees that the tapa is a Spanish invention, there is little consensus about how this ‘small plate’ phenomenon became so popular when dining in the Cayman Islands and what exactly makes a tapa.

In Spain, tapas keep the locals fueled up as they flit from bar to bar before their midday or evening meal. Thanks to this eminently sensible approach to socializing, the tapa phenomenon has spread far and wide beyond the Spanish-speaking world. Over the last few decades, tapas have become a familiar item in restaurants in Seven Mile Beach and the best can be considered to be some of the best food in the Cayman Islands.

The primary meaning of tapa is cover or lid and these days in Spain and elsewhere it has become synonymous with this style of food. The origins of the meaning are uncertain, but there is no shortage of theories:

A common explanation is that an item, usually a slice of bread, would be placed on top of a drink to protect it from the fruit flies attracted by the ubiquitous sweet sherry served in Spain at the time. At some point, it became a habit to top this "cover" with a snack.

Another explanation is that since customers are typically standing while eating a tapa in a traditional Spanish bar, there is the awkwardness of trying to eat with a plate in one hand and a drink in the other. The solution: to balance the plate on top of the drink to eat, making it a top.

Yet another theory has it that the name originated when tavern owners found that the strong taste and smell of mature cheese could help disguise that of bad wine and started offering free cheese when serving cheap wine.

It is also claimed that shepherds used to cover jugs of wine with bread slices to protect it from snakes while in the field. This bread would eventually be eaten with meat or cheese upon return from herding.

Others believe the tapas tradition began when king Alfonso X of Castile recovered from an illness after drinking wine with small dishes between meals. He celebrated his recovery by passing a law making it compulsory to serve small dishes with wine in Spanish bars (and quite possibly also as a means to reduce drunken rowdiness by forcing soldiers and sailors not to drink on an empty stomach).

Others say that King Alfonso XIII was given a glass of wine in Cadiz covered with a slice of cured ham to protect the wine from beach sand on a windy day. The king, after drinking the wine and eating the tapa, ordered another wine "with the cover".

Here at The Wharf our chefs have taken the tapas concept, added a Caribbean flair and elevated it into fine dining, Grand Cayman style. Local takes on the tapas theme include the freshest locally sourced ingredients for dishes such as conch fritters, coconut shrimp, Caribbean lobster bites and a blue crab and avocado salad – all accompanied by a glass of something special from our famous and comprehensive wine menu.