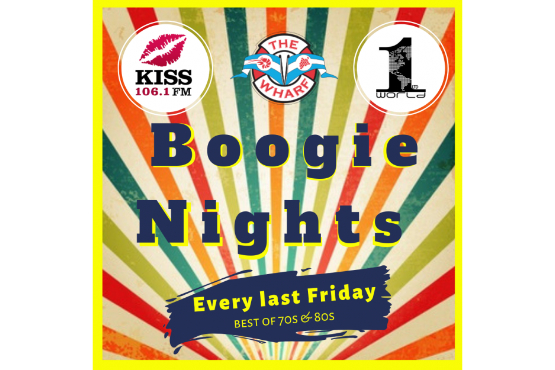 Accentuate Your Evenings with Boogie Nights at The Wharf

The famous mainstay of Grand Cayman nightlife boogies down at The Wharf on the last Friday of every month.

Once a month, an unusual gathering takes place at The Wharf that has become a mainstay of the Grand Cayman night scene. As 9 pm descends on this bastion of fine dining in the Cayman Islands, a motley crowd gathers, some dressed in a veritable time travel laundry basket of crushed velvet, bellbottoms, platform shoes, frilly shirts, satin jackets, glitter, and sculpted hair.

What’s going on? It’s the last Friday of the month, that’s what is going on. It is the Boogie Nights.

For long-term residents and regular visitors, the last Friday of the month demands a pilgrimage to The Wharf for a celebration of dance and pop music from the 70s and 80s – that glorious era that began when the hippie Summer of Love ended and popular music discovered glam. It’s the era that boogied through the 80s until the grunge of the 90s took over.

The Wharf not only offers the best dinner in Grand Cayman, but it also offers a way to shed the pounds afterward!

The Wharf’s long-time manager, Reno Mancini, launched Boogie Night’s Old School Disco Dance Party in 2005 to “give the locals and expats a night to reminisce and get a little bell-bottom crazy,” according to Cayman Compass. “Disco night as a theme night then grew from there. More and more people started coming out and embracing their inner Travolta; dressing up in leisure suits and 70s dresses that it began to have a life of its own. I’m really proud to have started a Cayman tradition on the last Friday of every month.”

Too young to bop, too old to rave, the Disco era has been declared dead many times but, like the Thriller zombies, refuses to lay down to die. It compels those of a certain age (many who ought to know better) to rise from the couch, gather at The Wharf in the safety of numbers and perform the dance rituals of their youth. And it is brilliant.

Actually, those grooving on the dance floor tend to look more like regular people out for a fun time rather than extras from Saturday Night Fever. So you don’t have to feel like you are going to a costume party, just bring your dancing shoes and prepare to get sweaty dancing under the stars.

The success of the event relies heavily on the venue which, as well as being known as one of the best restaurants in the Cayman Islands, is ideally suited to hosting such a lively event. This free outdoor dance party starts at 9 pm and features the best tunes from the 1970s and 80s. DJ Flex 345 from Kiss 106.1 FM is on hand spinning favorite songs and taking requests. There are also prizes for the best costumes and dance moves, making Boogie Nights a themed event you won’t want to pass up.

Add a few drinks and a pre-disco meal at the best waterfront restaurant in Grand Cayman into the mix and it’s little wonder that Boogie Nights and it's 1.30 am bar closing is so popular.

The Wharf requires reservations, so make yours now for the next Boogie Nights event and avoid missing any of the glammed-out action. The establishment is centrally located on West Bay Road at the end of Seven Mile Beach, so it’s right in the center of Grand Cayman’s after-dark action. Call +1 (345)-949-2231 or email info@wharf.ky to make your reservation.